Whether you’re drawing a lightning scar on their forehead or measuring them up for a Stick Man onesie; you’ll realise how big this celebration of reading has become for schoolchildren up and down the country. “I have a passion for teaching kids to become readers, to become comfortable with a book, not daunted. Books shouldn’t be daunting, they should be funny, exciting and wonderful; and learning to be a reader gives a terrific advantage.”

A true national treasure, Roald Dahl had 17 kids’ novels published during his life, with two more published after he died in 1990.

“You can’t get a cup of tea big enough or a book long enough to suit me.”

Alongside his best-known works, The Chronicles of Narnia, C.S. Lewis also published dozens of non-fiction books and seven volumes of poetry.

“Writing is an act of faith, not a trick of grammar.”

E.B. White was a hugely respected journalist and English language expert, as well as the author of the beloved Children’s books, Stuart Little and Charlotte’s Web. 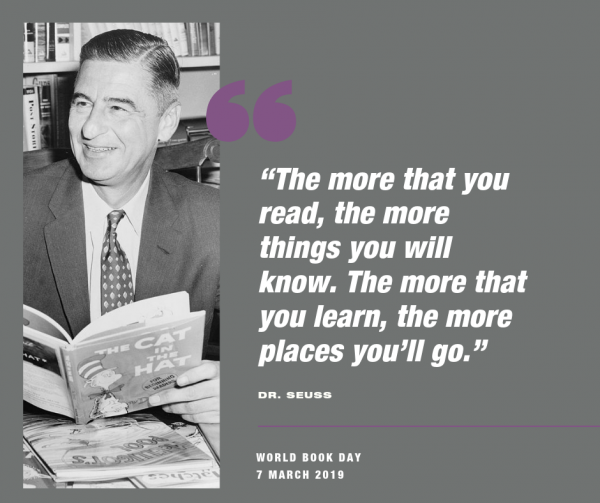 The creator of The Cat in the Hat, the Grinch and many more greatly-loved characters, Dr. Seuss’ books have sold hundreds of millions of copies worldwide.

“There’s something delicious about writing those first few words of a story. You can never quite tell where they will take you. Mine took me here, where I belong.”

Potter’s second great love aside from writing for children was the Lake District. She even used funds from her book sales to purchase farms and land in the region to protect them. “Writing for child is an art in itself, and a most interesting one.”

Enid Blyton wrote over 600 children’s books in her lifetime, and said her process was to just sit with a typewriter on her lap, and just let her imagination run wild.

“The best books come from someplace deep inside…. become emotionally involved. If you don’t care about your characters, your readers won’t either.”

Many of Blume’s young adult novels, including Are You There God? It’s Me, Margaret have been considered controversial at the time of publication, but have since sold millions of copies. “After nourishment, shelter and companionship, stories are the thing we need most in the world.”

In 2017, Philip Pullman revived the much-loved His Dark Materials series by releasing the first in The Book of Dust trilogy.

“You cannot write for children… they’re much too complicated. You can only write books that are of interest to them.”

Before writing for children, Maurice Sendak was an animator, having been inspired by the Disney film, Fantasia. “A real adult, someone who is really grown up and adult, couldn’t possibly write a book for children. Somebody like me, even when I’m 85, is pretty childish. I laugh at things young children laugh at.”

Dick King-Smith authored over 100 books between 1978 and 2003, many of which featured his most famous character, Babe the pig.

“I write for kids because I think the most interesting (and most humorous) stories come from people’s childhoods. When I was writing Diary of a Wimpy Kid, I had a blast talking on the phone to my younger brother, Patrick, remembering all of the things that happened to our family when we were growing up.”

Jeff Kinney’s famous Diary of a Wimpy Kid series started life as an online comic strip, before being turned into a book and film. “I don’t believe in the kind of magic in my books. But I do believe something very magical can happen when you read a good book.”

Best known for the Harry Potter series, J.K. Rowling is one of the world’s top 10 selling authors of all time.

“Encourage kids to be creative without worrying about being perfect.”

Dav Pilkey is a huge supporter of allowing children to be silly – and this is perhaps best showcased in his most famous series of books, Captain Underpants.

As well as writing the hugely-popular children’s classic, We’re Going on a Bear Hunt, Rosen also penned a biography of the much-loved Roald Dahl. “Reading is a conversation. All books talk. But a good book listens as well.”

Haddon’s best-known work, The Curious Incident of the Dog in the Night-Time was originally intended for adults, but ended up winning the Guardian Children’s Fiction Prize.

If you’d like to share your own favourite quotes from children’s authors, please visit our Facebook page. Or for more information on NFA, head over to our homepage.